Skip to the end of the images gallery

Skip to the beginning of the images gallery

Where are the Bible lands today? Where were Iraq and Iran in Bible times? Find out with the full-color, fold-out pamphlet that contains 17 maps showing ancient cities and countries in black with modern-day boundaries marked in red.

A fantastic tool for comparing places in the news with places in the Bible, Then & Now Bible Maps will also help you better understand the events and stories in the Bible by showing you where they occurred in conjunction to modern day locations. Helpful historic information includes:

• The Holy Land: Then (1300 BC Twelve Tribes) and Now (modern times) uses color coding to show Canaan divided by the Twelve Tribes, and the historical and modern-day names of cities within the regions.

• Paul's Journeys: The (AD 47-62) and Now (modern times) shows the locations of the Seven Churches of Asia (modern day Turkey) found in Revelation 1-3, as well as cities and towns, ancient ruins, mountains, modern capital cities and a key for measuring the distance traveled from city to city.

• Empires & Kingdoms: Then and Now® shows the changing boundaries of the Assyrian Empire, Babylonian Kingdom, and Persian Empire.

Related Products
Use the “Add to Cart” in the center of the page when items are selected. 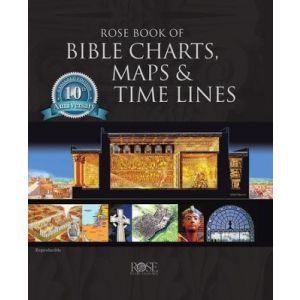